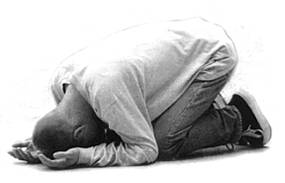 Many people look in the term “repentance” as an act of saying “I’m sorry, and I won’t do it again, can you please forgive me?” or confessing something like, “Yes, my life is not what it should be, and I will try to do better.”

This isn’t true repentance.  A conviction of sin must yield to a deep, downright, earnest repentance.

We see an example of it in Matthew 26:75, when Peter denied Christ three times, after which he remembered that Jesus told him that he would do just this:

And Peter remembered the saying of Jesus, “Before the rooster crows, you will deny me three times.” And he went out and wept bitterly.

The key word here is “wept bitterly“.  This in itself doesn’t sound very bad, but if you look at the word used by both Matthew – and Luke in Luke 22:62 – the Greek word used is pikros – which is defined as “with poignant grief, violently”. It’s used exactly two times in the New Testament, and it’s in these two verses.

What was being conveyed here wasn’t just a little weeping, Peter was violently crying, he was distraught over what he’d done. That, my friend, was Peter’s salvation point in his life.

A lot of people call this a “Come to Jesus moment” – a moment where you are so boxed in, that time where things can go no lower, that the only way to look, is up.

Have you ever been there? If you’re a believer, you have at one point or another. Either at the time of your salvation, or at a time of backsliding and God had to get your attention – you’ve been there.

God is a patient Father, but as a good parent, He chastises those He loves (Hebrews 12:6). If you think you’re going to get away with anything – think again. Moses wrote in Numbers 32:23 – “be sure your sin will find you out”.

Which leads me to the times of the day – we all see what’s going on around us. Political corruption of the highest order, sinful lifestyles being tolerated, Sinful activities being advocated by not keeping perpetrators behind bars and releasing them without bail.

There’s no sense of repentance in this world today. How can we expect God to “heal our land” – without true repentance on a national scale?

Bow before God and ask the Holy Spirit to make you more deeply ashamed and to grow in you Divine remorse.

Your heart will be filled with indescribable sadness and, broken down and bruised by the question, you will say, “Lord, I have not lived as I should, but still I love You. I give myself to You.”

May God now give us grace that, with Peter, we may go out and, if needed, weep bitterly.

If we don’t weep bitterly, shouldn’t we sigh deeply, bow humbly, and cry earnestly, “God, reveal to me the worldly life I have been living. Reveal to me what hinders me from having my life full of the Holy Spirit”?

Shouldn’t we cry, “Lord, break my heart with complete self-despair. Make me wait in helplessness for the power of the Holy Spirit to fill me with a new life given fully to Jesus”?

This, my friend, is true, deep confession.

Repentance is also “turning away” from the sin. Once we cry out to the Lord to show us our sin, and we ask forgiveness of said sin – we are to turn away from it.

The word repentance comes from the Hebrew word teshuvah (teh-SHUV-ah) meaning “to turn back”. We need to renounce that sin – and banish it to the depths of the sea – with God’s help, through the Holy Spirit, and to turn back to what is good.

What really got me thinking about this topic in earnest is the revelation of one of the presidential candidates, selling access to his political power through his son. This was revealed after repeated denials that this ever took place – and only after a laptop that was left for repair, with repairs never paid for and the laptop never claimed – had evidence to the contrary.

This is the same candidate who claims to be a “good Catholic” and “very religious” – and yet advocates for the murder of the unborn up to the moment of birth.

This same candidate, through official corruption – which is now in the process of being proven – has sinned against this nation – and therefore, God, many times over his almost half a decade of public “service” – why has God held His hand back?

I mean, he’s lost two bids for the presidency, he seems to be going senile – he can’t answer simple questions without being given answers or the use of a teleprompter…

If anyone needs to get on his knees and repent – it’s Joe Biden!

The local pastor I’ve written about here, who’s also a state legislator – who won’t go to the mat on putting restrictions in place on abortion in this state – or will uphold the “legal right” (under man’s law), to allow homosexual marriage – and not uphold God’s law, which supersedes man’s law. This pastor needs to do some serious and deep repentance.

And so do the pastors in town that support him – as to those in the congregations that see things the same way he does.

It’s no wonder that we’re in the mess we’re in.

Everyone prays 2 Chronicles 7:13-14, but it’s not going to happen until we, as a nation, get things right. Let’s look at the verses:

When I shut up the heavens so that there is no rain, or command the locust to devour the land, or send pestilence among my people, if my people who are called by my name humble themselves, and pray and seek my face and turn from their wicked ways, then I will hear from heaven and will forgive their sin and heal their land.

In other words, when God sends calamity on the earth – famine, draught, disease, among other things – which we have in abundance today – there are things that we believers need to be doing:

Then, and only then, will God hear from Heaven, forgive sins and heal the land.

Are we, as a people, this sincere in our prayer for this nation? I would suggest that for most people, we’re not.

If we’re serious about God healing this nation, we need to be bringing up the sin in this nation like never before.

We need to be demanding our lawmakers to outlaw the murder of the unborn. If the lawmaker won’t comply – replace the lawmaker with one who holds Godly values. In other words – vote like lives depend in it – because they do.

We need to start publically holding public officials accountable – and let the perp walks begin! Yes, we pray for their repentance and salvation, but there’s an earthly price to pay for crime. Even David – a man after God’s own heart – had to pay for the adultery with Bathsheba.

Only after we show God that we’re serious about cleaning up our mess – will He possible hold back His hand. I mean – seriously – why would God save a people who keep thumbing their noses at Him?

Think on these things – then get on your faces Christians – and repent for this nation like never before.