Election Day in the USA is next Tuesday, November 7th, and although it’s not an election for “national” offices, you’ll be electing local leaders – many, no doubt, will aspire for higher, national office some day.

Now is the time to “separate the wheat from the chaff,” so to speak.

This means that it’s time to look at these local candidates – and decide on who God would want to see there, and not what your conscience says. As a believer in Christ – you are to do what God would want done, not what you feel is right – you should KNOW what’s right and pleasing in God’s eyes!

And for those heathens out there reading this who are now boiling at the thought that I would bring God into an election – know this:

Your church and/or pastor may be checking his tongue at the door of his study – I am not. God woke me up at 2:08 this morning to put this online for you – and by golly, I do what God tells me to do!

If a candidate in a local race supports the the murder of the unborn – it’s your duty, as a believer in Christ, not to vote for that candidate. The sixth commandment given in Exodus 20:13 and again in Deuteronomy 5:17 is plain and simple:

“You shall not murder.”

The Hebrew used is לֹ֥֖א תִּֿרְצָֽ֖ח׃ – which is transliterated as lo traSACK – it is literally translated as “not do murder”.

To the King James purists, it does NOT say “do not KILL” – there are many times that justifiable killing is necessary. IF someone tried to break into my home, they will find that out the hard way – I will protect my family at all costs, even if it means taking the life of an attacker.

Murder us completely different – Murder is defined by the Merriam-Webster Legal Dictionary as:

The crime of unlawfully and unjustifiably killing another; such a crime committed purposely, knowingly, and recklessly with extreme indifference to human life or during the course of a serious felony.

Abortion fits this definition! As a believer in Christ, you must accept the fact that an unborn child is a human being – and that purposely killing that human being, with reckless disregard, and without justification – is murder. 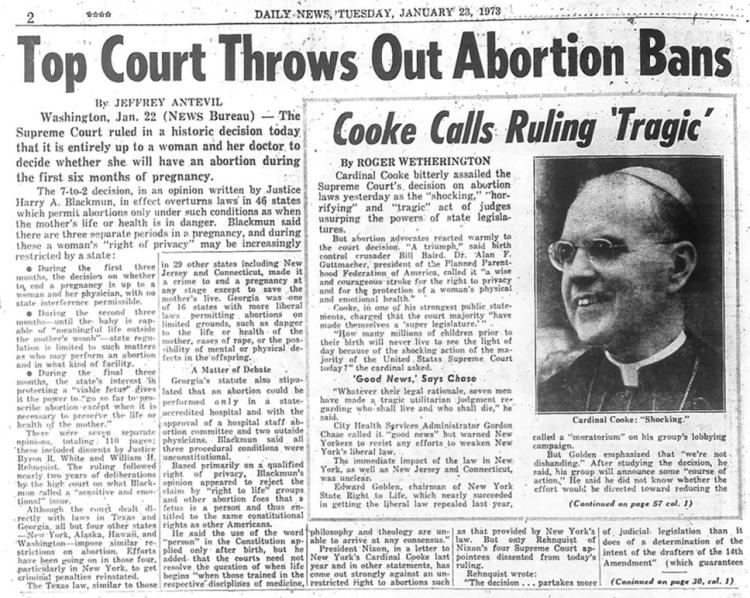 Yet, the US Supreme Court saw it fit to usurp Article 1 Constitutional powers, rewrite law – and legislate from the bench – in 1973, in the landmark Roe v. Wade case, which legalized the lawful, and state-sanctioned execution of millions – almost 70,000,000 (that’s 70 MILLION) children – from then until now. If that doesn’t turn your stomach, maybe this does: Hitler exterminated 6 MILLION Jews during the Holocaust – the US government has allowed OVER 10 TIMES that number to be exterminated!

When does the government confer rights to an unborn child – the weakest among us?  Heck – they’re conferring rights on non-citizens and illegal aliens – but not on the unborn citizen? Think about the logic – or lack of logic here.

And you are thinking of voting for this candidate?

Bring God into the Voting Booth – vote for the candidate who supports the right to life of the unborn child, and supports the rollback of Roe v. Wade. That’s what God would want – that’s following HIS commandments! You will answer eventually, for doing otherwise.

If a candidate in a local race supports same-sex marriage, rights afforded to same-sex couples, transgenderism, or anything else that requires one to believe differently than male-female relationships and marriage – then it’s your duty, as a believer in Christ, not to vote for that candidate.

Then God said, “Let us make man in our image, after our likeness. And let them have dominion over the fish of the sea and over the birds of the heavens and over the livestock and over all the earth and over every creeping thing that creeps on the earth.” So God created man in his own image, in the image of God he created him;
male and female he created them. (Genesis 1:26-27 ESV)

Note that God made man (male) – and woman (female). He didn’t create any other gender.

Facebook, hardly a conservative lot – and a bunch that goes along with pretty much anything liberals come up with – currently lists 71 different genders from which users can choose. Seventy -One! Is there not a Bible-believing person employed there?

There are men’s bathrooms, and women’s bathrooms – two genders, two bathrooms! Now there are “Unisex” bathrooms – which anyone can use. And of course, if you identify as one gender (different than your own), you can use that bathroom!

Ludicrous! Ridiculous! But it’s becoming law – thanks to liberals in government! It’s up to we believers in Christ – to reverse this trend. and to restore natural law and order to society.

Then the Lord God said, “It is not good that the man should be alone; I will make him a helper fit for him.” Now out of the ground the Lord God had formed every beast of the field and every bird of the heavens and brought them to the man to see what he would call them. And whatever the man called every living creature, that was its name. The man gave names to all livestock and to the birds of the heavens and to every beast of the field. But for Adam there was not found a helper fit for him. So the Lord God caused a deep sleep to fall upon the man, and while he slept took one of his ribs and closed up its place with flesh. And the rib that the Lord God had taken from the man he made into a woman and brought her to the man.

Then the man said, “This at last is bone of my bones and flesh of my flesh; she shall be called Woman, because she was taken out of Man.”

Therefore a man shall leave his father and his mother and hold fast to his wife, and they shall become one flesh. And the man and his wife were both naked and were not ashamed. (Genesis 2:18-25 ESV)

This is the first God-ordained wedding – Note that the helper isn’t a male – but a female, made from the rib of the male. And as verse 24 says: Therefore a man shall leave his father and his mother and hold fast to his wife, and they shall become one flesh. His wife – not Her wife – or His husband.

Two (man and woman) become one flesh – to procreate – that is, to reproduce, to have children! It’s created, and ordained, by God for man and woman, in marriage, to come together.

All throughout the Bible, there are references to men and women procreating – not men with men, or women with women – unless referring directly to sexual sin.

Yet in 2015, in Obergefell v. Hodges – the US Supreme Court again legislated from the bench, again – usurping the Article 1 Constitutional powers of Congress to write laws – and made the practice of same-sex marriage legal in the USA.

And you are thinking of voting for this candidate?

Bring God into the Voting Booth – vote for the candidate who supports marriage as being between a man and a woman, and supports the rollback of Obergefell v. Hodges. That’s what God would want! You will answer eventually, for doing otherwise.

Judge Roy Moore of Alabama is one – and I believe that he’ll win – because God wants to see His good name restored on our nation once again.

I believe that there are others out there too – and it’s your duty – as a believer in the one, true God, and your Savior Jesus Christ, to vote them in.