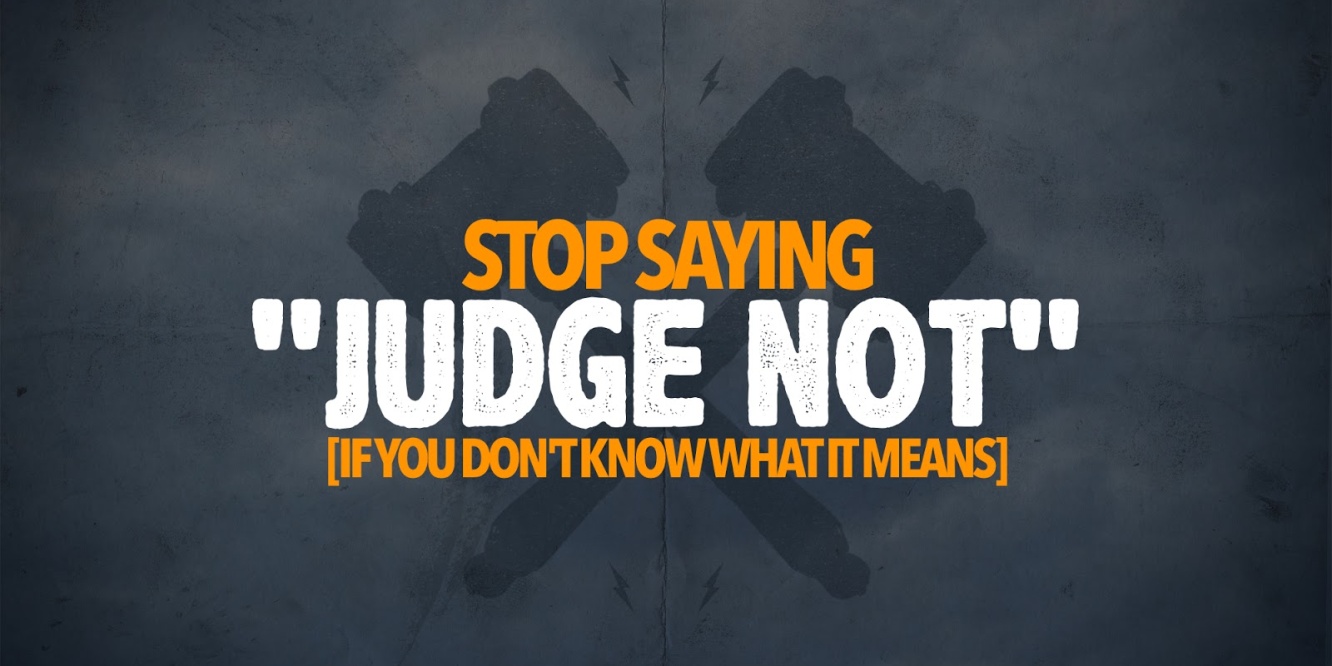 Suppose you’re a manager with some employee subordinates under you. They have tasks to perform, but one employee falls short and makes a mistake.  Management 101 says that you deal with the employee’s performance in order to change it, and have them perform the task correctly.

Yet the moment a Christian shows another person – especially if that person calls themselves a Christian – the sin in their lives, so as to get that person to correct the behavior, one or more of the following are thrown back:

And any number of other epithets that one can throw. I’ve heard them all.

The problem here, is that the Word of God has been so misinterpreted by so many, for so many years – that when one goes back to the Greek manuscripts, most are surprised to find that they were wrong in their interpretation.

One thing is clear – Christians ARE to rightly judge sin.

Remember our examples at the beginning of the message? We were talking about behavior – not the person. Your little darling is being unruly – and you’re embarrassed, and you’re angry – but you don’t hate your child, right? You don’t wish to do the child harm – but the behavior needs correcting.

The same is true with the sinner.

While it’s true that we’re all sinners, and can’t condemn another – we are to judge righteously. Jesus actually said so:

Do not judge by appearances, but judge with right judgment.” (John 7:24)

The word judge in all of the New Testament Greek is krino – which literally means to determine, or to discern something. The apostle Paul uses the word in Titus 3:12 when deciding where to stay for the winter. Luke uses it in Acts to determine how far, and where, to travel (Acts 20:16; 27;1).

Many assumed that Jesus condemned all judging – and that’s simply not true. We are to judge with right judgement (John 7:24) – those were Jesus’ words. This means that there’s a right way, and a wrong way to judge.

When we judge – we look at the behavior – the sin. Just as the parent wants to correct the behavior, we want the sinner to repent – to turn from the sin. To not do so – to not point out the sin – is to actually hate that person – right into Hell. We’re to love the sinner – into repentance and salvation.

In the case of another Christian – we are to come around that person with humility, and point out the error – with the goal being restoration to the Body of Christ.

Jesus also spoke against hypocritical judgement – which gets to Matthew 7:3-5. There’s nothing wrong with helping your brother get the speck out of their eye – but when you have the same sin going on within you – that’s the log, or the plank, in your own eye. If you’re pointing out sexual sin to a brother – and you’re steeped in it yourself, then Matthew 7:3-5 is for you, as you’re a hypocrite.

If you’re heterosexual and monogamous – and preaching against homosexuality, then this does not apply – as you’re not being hypocritical. You’re pointing out, and teaching, what God’s Word says on the topic.

That brings us to the Samaritan woman caught in adultery in John chapter 8. People just love to throw verse 7 around – without knowing the backstory behind it.

The Pharisees wanted to get something – anything – on Jesus. Here’s this teacher running around, healing the sick on Shabbat (sabbath), forgiving sins – telling people that He’s God. Blasphemy! But they needed more – they needed him to contradict the Law of Moses publicly before they could act.

So a plan was hatched – a man was selected to entice a woman, not his wife, to engage in adultery. They then showed up at the door of the house where this was going on – they already knew where and when – and hauled the woman off to Jesus, for a “trial”.

Where was the guy? The Law of Moses stated that he too, was to be stoned/ Again, the whole thing was a set up – the man was probably there in the crowd, when the Pharisees said, “Teacher, this woman has been caught in the act of adultery. Now in the Law, Moses commanded us to stone such women. So what do you say?” (8:4-5)

Jesus knew darned well that this was a set up to entrap him. It was a “darned if he did/darned if he didn’t” type of situation. If Jesus said to “stone her” – then the people would think that He was a hypocrite as the forgiveness and healing message He preached was all a lie; and if He spared the woman, then He was going against the Law of Moses and subjected Himself as a hypocrite among the teachers.

They were badgering Him with the question – “So well, what do we do? Huh? Well? Answer us!” He turned the whole thing back on the Pharisees in verse 7: “And as they continued to ask him, he stood up and said to them, ‘Let him who is without sin among you be the first to throw a stone at her.'”

In essence – he was making hypocrites out of them! After all of them examined themselves and realized that they too, had sin, that there’s no way they could stone this woman – they dropped their stones and walked away.

Jesus knew that it was a trap. He knew the motivations of the Pharisees and He took this into account. He also pointed out her sin – and told her to go and sin no more.

When we judge the behavior – the sin of others – we must do it with the right intentions and motivation. We don’t berate, we don’t condemn. We come from a point of humility, point out the error, again, with the intention of restoration if the person is a believer, or salvation if not.

There are times when Church leadership may need to step in and deal with a sinful situation, and possibly administer church discipline which could include sanctions such as temporary suspension of membership to cutting all ties with the individual. This is biblical as well – but only with Church Leadership (See Matthew 18).

So when someone comes to you and says, “who are you to judge me?” – remember, as a believer, you are to judge sin rightly. More than likely, the person knows they’re sinning, and they’re being convicted – and they don’t like it one bit.