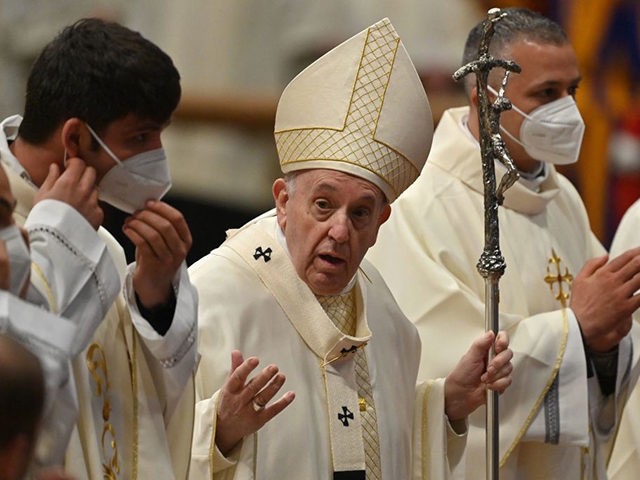 This past Wednesday, I read an article in my Breitbart app that drove my blood pressure through the ceiling.

“Pope Francis: You Can Recognize False Christians By Their ‘Inflexibility’”

The Roman Catholic pope, Francis however, is the gift to fundamentalist and evangelical Christians, that keeps on giving.

The opening line set the stage for my increased blood pressure: “Pope Francis warned Wednesday against Christians who are overly attached to tradition and ‘disturb communities’ through their inflexibility.”

It’s clear that Francis doesn’t know nor does he read his Bible.

Francis now takes John 8:31-32 out of context. Jesus said, “If you abide in My word, you are My disciples indeed. And you shall know the truth, and the truth shall make you free.”

Yes, the Gospel does give us the truth, not the Roman pope, and the Gospel sets us free, but God does set expectations. As I’ve said before, God is holy, He cannot reside where there is unholiness.

Homosexuality is unholy. Homosexuals can change their behavior, repent of and turn from it, and be forgiven. For there to be forgiveness by God through the blood of Jesus, homosexuals must repent and turn from the deviant behavior. If Francis is the theologian he claims to be, he should know this and stop defending this “community”.

The transgender community knows full well that there are two, and only two genders, and they can’t change that. God made you a male, with an XY chromosome, or a female with an XX chromosome. This is science, and the mutilation of one’s body, or identifying with the opposite gender doesn’t change that scientific and God-ordained fact.

Francis knows this deviant behavior and now wants the church to be more inclusive. Again, this behavior is absolutely unholy.

Francis is “woke” – and so are quite a few Protestant pastors and churches who follow the “woke” lead.

This sort of people “strongly affirm that the true Christianity is the one they adhere to, often identified with certain forms of the past, and that the solution to the crises of today is to go back so as not to lose the genuineness of the faith,” Francis said.

Malachi 3:6 says that God does not change, and Hebrews 13:8 says that Jesus Christ is the same yesterday, today, and forever, so if we stay in the present, and God doesn’t change, then the ways of the past still apply, don’t they?

God laid down expectations. What changed between the old and new testaments? The fulfillment of the sacrificial law. Jesus’ death on the cross was the final sacrifice for our sins – past, present and future, if we believe on Him as savior.

The moral law, the Ten Commandments are still in effect. The Law was meant to show us the depravity of our sin. Jesus provides forgiveness for sin if, and only if, we accept His gift of forgiveness, and believe on Jesus as Savior and Lord of our lives.

This man is referred to as “holy father” – he’s never to be referred to a father of any kind. Same goes for any Roman Catholic priest. There’s only one Holy Father, and that’s God the Father and no other. Jesus was rather emphatic about this. In Matthew 23:9, He said, “Do not call anyone on earth your father; for One is your Father, He who is in heaven.”

God’s Word doesn’t change. Neither does God. Only the way He has dealt with sin through a New Covenant has been modified – a final sacrifice has been made, by a sinless man, Jesus Christ, so that we can be forgiven of our sin.

So, let me ask you, how “flexible” are you Christian? Remember the word from last week’s message? Compromise.

If you’re flexible in your doctrine, you’re compromising the faith. Remember, God doesn’t change – neither does God’s Word, which is why we’re to be inflexible when it comes to doctrine and our faith!

Ephesians 4:4-6, the Apostle Paul writes that, “There is one body and one Spirit, just as you were called in one hope of your calling; one Lord, one faith, one baptism; one God and Father of all, who is above all, and through all, and in you all.”

That means the Body if Christ is one, unified. We follow Gods Word and we don’t change it to suit the times or the culture. We don’t allow a Catholic bishop to modify it to suit their particular agenda. God’s not a Roman Catholic, a Methodist, a Presbyterian or a Baptist. He’s not a fundamentalist nor is He a charismatic. He’s not a Calvinist or an Arminian. God is God, we are His creations. We were to be obedient to Him and His Word in the past – and we’re to be obedient now … nothings changed.

That’s what Paul meant in Ephesians 4; anything else is disunity and God won’t have that. There’s one Lord, one faith, one baptism, one God and Father of all.

Since this is Gods Word, then the Roman pope speaks heresy in his general audience referenced in this article, and as such, should be discredited.

So, I ask yet again, are you flexible or inflexible? The answer will indicate whether you are compromising the faith – or not.