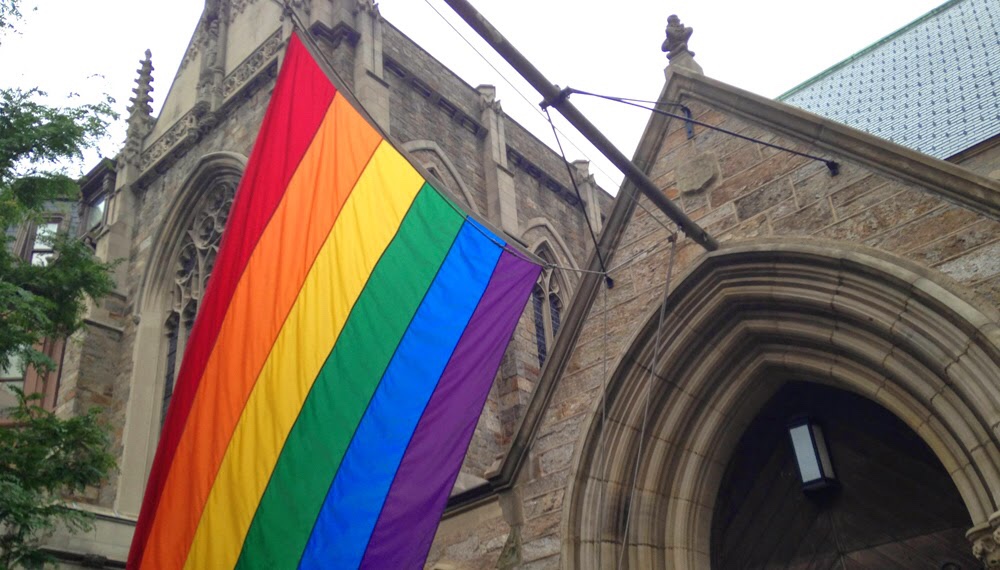 There are seven churches to whom Christ writes “Edict-Letters” – we see them in Revelation 2 and 3 – all but one has strengths, and all but two have weaknesses.

 The church at Smyrna (Revelation 2:8-11) was spiritually rich, and was enduring a lot of persecution – and the church at Philadelphia (Revelation 3:7-13). No, we’re not talking about Smyrna, Delaware and Philadelphia, Pennsylvania – we’re talking about the ancient cities in what would be the area of modern-day Turkey (see inset map). These churches were doing all the right things – Jesus found nothing wrong with them – there was no rebuke.

The churches at Ephesus, Pergamum, Thyatira, Sardis and Laodicea however, had varying degrees of rebuke – with Laodicea being the worst of the bunch. At least with the other four, the Lord found something good about them

This is where we see churches today. Very few – and I mean a very few – are like Smyrna and Philadelphia – which I would call the most conservative of churches.The rest have some degree of liberalism in their mix.

There are pastors I know, that tolerate sin among their church, and will not call it out. Whether it’s to keep the peace among the flock, or fear of the financial well running dry, they refuse to keep their church pure.

 Does your church, or example, accept homosexuals or transgender people?

As visitors, they should be welcomed, and taught the truth of God’s Word, but if they aren’t accepting of the truth – put them out – and have nothing to do with them. They will only infect your church. Never, ever, place them in any position within the church, not even usher or janitor! Satan will get into the church through these cracks and infiltrate the flock. See the church at Thyatira:

To the Church in Thyatira

“And to the angel of the church in Thyatira write: ‘The words of the Son of God, who has eyes like a flame of fire, and whose feet are like burnished bronze.

“‘I know your works, your love and faith and service and patient endurance, and that your latter works exceed the first. But I have this against you, that you tolerate that woman Jezebel, who calls herself a prophetess and is teaching and seducing my servants to practice sexual immorality and to eat food sacrificed to idols. I gave her time to repent, but she refuses to repent of her sexual immorality. Behold, I will throw her onto a sickbed, and those who commit adultery with her I will throw into great tribulation, unless they repent of her works, and I will strike her children dead. And all the churches will know that I am he who searches mind and heart, and I will give to each of you according to your works. But to the rest of you in Thyatira, who do not hold this teaching, who have not learned what some call the deep things of Satan, to you I say, I do not lay on you any other burden. Only hold fast what you have until I come. The one who conquers and who keeps my works until the end, to him I will give authority over the nations, and he will shepherd them with a rod of iron, as when earthen pots are broken in pieces, even as I myself have received authority from my Father. And I will give him the morning star. He who has an ear, let him hear what the Spirit says to the churches.’ (Revelation 2:18-29)

Does your church teach things that aren’t in accordance with God’s Word? For example, Rick Warren – the author of The Purpose Driven Life and The Purpose Driven Church – along with other churches – has started teaching that Islam’s “Allah” and the God of Abraham, Isaac and Jacob – the God of Jews and Christians – are one in the same. He does this to keep peace with Muslims through is alliance with various Islamic groups.

There’s a group calling itself “Faith Shared” for example, which promotes this type of thing. The Faith Shared website has this to say.

The “Faith Shared event as a way to engage faith leaders on the national and community levels in interfaith events intended to highlight respect among people of different faiths.”

“this project will not only serve as a model for tolerance and cooperation and promote local faith leaders as champions of such, but it will also create a concrete opportunity to build and strengthen working ties between faith communities moving forward.”

“Faith Shared asks houses of worship across the country to organize events involving clergy reading from each other’s sacred texts. An example would be a Christian Minister, Jewish Rabbi and Muslim Imam participating in a worship service or other event.”

As noble as Faith Shared’s intention is to promote tolerance, it is also extremely misguided and profoundly unbiblical. The church is not for reading anti-Christian material like the Qu’ran which denies the Trinity, denies Christ’s deity, denies his atonement, and denies his resurrection. To promote such reading at a Christian pulpit is to violate God’s word.

The churches that participated were listed on the Faith Shared website. They consisted of United Methodist churches, some liberal Lutheran churches, a few that were Catholic, several that were United Churches of Christ, along with Episcopal, Presbyterian, and Unitarian Universalist churches. There was a Baptist church and one church called “The Church of our Savior.” Undoubtedly, these “churches” are so liberal they probably aren’t Christian. After all, why would any Christian church want anti-Christian literature read from the pulpit, the place where the truth of God’s word is supposed to be preached?

Why? The answer is simple; they have ignored God’s word and trampled underfoot the gospel of Christ so they might follow the liberal call of political correctness and social tolerance. Fortunately, there were less than 75 churches that participated. But even one is too many.

To these, and other churches, Christ’s letter to Pergamum is appropriate:

To the Church in Pergamum

“And to the angel of the church in Pergamum write: ‘The words of him who has the sharp two-edged sword.

“‘I know where you dwell, where Satan’s throne is. Yet you hold fast my name, and you did not deny your faith in Me, even in the days of Antipas my faithful witness, who was killed among you, where Satan dwells. But I have a few things against you: you have some there who hold the teaching of Balaam, who taught Balak to put a stumbling block before the sons of Israel, so that they might eat food sacrificed to idols and practice sexual immorality. So also you have some who hold the teaching of the Nicolaitans. Therefore repent. If not, I will come to you soon and war against them with the sword of my mouth. He who has an ear, let him hear what the Spirit says to the churches. To the one who conquers I will give some of the hidden manna, and I will give him a white stone, with a new name written on the stone that no one knows except the one who receives it.’ (Revelation 2:12-17)

In other words, stop with the false teaching! God won’t have it in His church.

Some remind me of the church at Sardis – some good and loyal people, but a lot of dead works.

For example, God made us to work for what we have. He initially put Adam in the garden of Eden to tend it. In other words, God gave him what he needed – the resources – to work and sustain himself.

Churches are meant to help those less fortunate – yes – but to help them up to self-sufficiency, not keep them in abject poverty with government handouts! When I was thinking of starting a ministry, a pastor I know advised me to “not take the rich, white-man’s money, but get a government grant.” That statement is so unbiblical – not to mention unethical – on so many levels, I can’t even enumerate them here.

God’s Word says that if a man doesn’t work, he shouldn’t eat either  (2 Thessalonians 3:10). Ecclesiastes 2:24-25 says that “There is nothing better for a person than that he should eat and drink and find enjoyment in his toil. This also, I saw, is from the hand of God, for apart from him who can eat or who can have enjoyment?”

So why would a church, and a pastor, put so much emphasis on “free money” – and other “free” stuff. This creates “dependence” and God never meant us to be dependent, but to work for what we have. If you’re able-bodied, you should be working. Bernie Sanders is absolutely wrong about this. Socialism is unbiblical, and pastors who embrace it, do so at the peril of their churches.

To the Church in Sardis

“And to the angel of the church in Sardis write: ‘The words of him who has the seve n spirits of God and the seven stars.

“‘I know your works. You have the reputation of being alive, but you are dead. Wake up, and strengthen what remains and is about to die, for I have not found your works complete in the sight of my God. Remember, then, what you received and heard. Keep it, and repent. If you will not wake up, I will come like a thief, and you will not know at what hour I will come against you. Yet you have still a few names in Sardis, people who have not soiled their garments, and they will walk with me in white, for they are worthy.The one who conquers will be clothed thus in white garments, and I will never blot his name out of the book of life. I will confess his name before my Father and before his angels. He who has an ear, let him hear what the Spirit says to the churches.’ (Revelation 3:1-6)

And if you combine all of these, you get Laodicea, the worst of them all -Biblically blind, bankrupt, naked and lukewarm  the Lord will just get rid of them.

Among them too, are the Israel deniers – there are actually churches who want Israel to split Jerusalem, give up land that God gave to them, or even deny their right to exist,  These are God’s Chosen People – and my people too – I’m a Messianic Jew! We have every right to exist, with all of the land given by covenant, by God Almighty Himself.

To the Church in Laodicea

“And to the angel of the church in Laodicea write: ‘The words of the Amen, the faithful and true witness, the beginning of God’s creation.

“‘I know your works: you are neither cold nor hot. Would that you were either cold or hot! So, because you are lukewarm, and neither hot nor cold, I will spit you out of my mouth. For you say, I am rich, I have prospered, and I need nothing, not realizing that you are wretched, pitiable, poor, blind, and naked.I counsel you to buy from me gold refined by fire, so that you may be rich, and white garments so that you may clothe yourself and the shame of your nakedness may not be seen, and salve to anoint your eyes, so that you may see. Those whom I love, I reprove and discipline, so be zealous and repent. Behold, I stand at the door and knock. If anyone hears my voice and opens the door, I will come in to him and eat with him, and he with me. The one who conquers, I will grant him to sit with me on my throne, as I also conquered and sat down with my Father on his throne. He who has an ear, let him hear what the Spirit says to the churches.’”

2 Replies to “Looking at the Liberal Church”