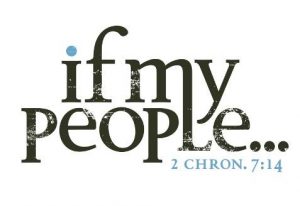 Most believers look at 2 Chronicles 7:14 and think that this verse solves all of our problems. This isn’t true, nor is it biblical.

To understand this verse, we need to look at it in context.

You see, Solomon just finished building the temple and was dedicating it to the Lord Yahveh.  All of the people were involved – not just Solomon and the priests – everyone.

Verse 13 is the first part of this sentence, which continues into verse 14. The idea is further solidified in the remainder of the chapter.  Let’s look at verses 13 and 14:

When I shut up the heavens so that there is no rain, or command the locust to devour the land, or send pestilence among my people, if my people who are called by my name humble themselves, and pray and seek my face and turn from their wicked ways, then I will hear from heaven and will forgive their sin and heal their land.

It’s clear that God is telling us that He will send judgement on us when we go astray – but, when He does, there is a remedy – and it consists of several parts:

Then – and only then – will God hear from Heaven, forgive our sin – and heal our land.

Our nation, and other nations of the world, have been blessed beyond measure.  Yet we have been under increasing judgement.  To read more about that word from the Lord, read my post on how the USA is under judgement here.

So how do we get out of it? I don’t know if that’s possible anymore. Could God have turned His back on us? Let’s look at Romans 1, starting in verse 18 – where we see the steps God takes before He is just fed up – and turns us over to our own sin, and turns His back on the people.

For the wrath of God is revealed from heaven against all ungodliness and unrighteousness of men, who by their unrighteousness suppress the truth. For what can be known about God is plain to them, because God has shown it to them. For his invisible attributes, namely, his eternal power and divine nature, have been clearly perceived, ever since the creation of the world, in the things that have been made. So they are without excuse. For although they knew God, they did not honor him as God or give thanks to him, but they became futile in their thinking, and their foolish hearts were darkened. Claiming to be wise, they became fools, and exchanged the glory of the immortal God for images resembling mortal man and birds and animals and creeping things. (Romans 1:18-23)

This is the first step – people start looking away from God, and turning to idols. Back in the day – the idols were golden calves, statues of animals, and towers to the false gods Baal and Molech.

Nothings changed today – people are worshiping statues of Buddha, trees, nature, money, possessions – and bowing to false gods such as Allah and Molech.

We are sacrificing our children at the altar of Molech, just as was done in biblical times. This is being done through child ritual sacrifice (and child trafficking) – and through abortion – where over sixty-one million (61,000,000) children have been slaughtered in the name of “Roe v. Wade” here in the USA alone.

Just think of how productive these human beings could have been as contributing members of society – but no, we had to allow mothers to choose to kill their babies.

We as a nation, and as a people, thought we were so smart – but as it says in verse 22. we have become fools. We probably wouldn’t have a Social Security and Medicare problem today, if we had 61,000,000 additional taxpayers in the workforce. But I digress…

Therefore God gave them up in the lusts of their hearts to impurity, to the dishonoring of their bodies among themselves, because they exchanged the truth about God for a lie and worshiped and served the creature rather than the Creator, who is blessed forever! Amen. (Romans 1:24-25)

Paul’s indictment here is that by a wretched exchange human beings came to worship and serve “created things rather than the Creator.” They have wholly rid themselves of God by substituting other objects in his place. This should be sufficient to banish the notion that the practice of idolatry is simply using a man-made image or false god in order to worship God. Contemplating this abysmal betrayal, Paul can’t resist an outburst to counteract it. The Creator “is forever praised.” God’s glory remains, even though unacknowledged by many of his creatures. (Expositor’s Bible Commentary [Abridged Edition]: New Testament)

We’ve dishonored ourselves by serving false gods and worshiping idols – it’s that simple!

For this reason God gave them up to dishonorable passions. For their women exchanged natural relations for those that are contrary to nature; and the men likewise gave up natural relations with women and were consumed with passion for one another, men committing shameless acts with men and receiving in themselves the due penalty for their error. (Romans 1:26-27)

Note that there is a connection between the first and second phases. Given that people have started worshiping their own deities – gods – they were now free to follow their own sinful passions.

Paul is showing the unnatural relations of men with men, women with women.  This type of perversion has no counterpart anywhere in the animal kingdom – it’s purely made from human imagination.

And since they did not see fit to acknowledge God, God gave them up to a debased mind to do what ought not to be done. They were filled with all manner of unrighteousness, evil, covetousness, malice. They are full of envy, murder, strife, deceit, maliciousness. They are gossips, slanderers, haters of God, insolent, haughty, boastful, inventors of evil, disobedient to parents, foolish, faithless, heartless, ruthless. Though they know God’s righteous decree that those who practice such things deserve to die, they not only do them but give approval to those who practice them. (Romans 1:28-32)

What’s a “debased” (or in some translations, “depraved”) mind? Well, in this case, people just gave up on God, and He gave up on the people.

Think of it this way, it is God’s function to judge, but people have usurped that prerogative in order to sit in judgment on him and dismiss him from their lives.

Look at that list of sins! They’re all around us today – and many of them are prominent in our government!

That last verse – verse 32: Though they know God’s righteous decree that those who practice such things deserve to die, they not only do them but give approval to those who practice them – – we see this in society today! People are given permission to act in this way! Many of our politicians are doing it!

Sexual perversion? Fornication? Adultery? All approved by our leaders – because many of them are doing it! We have a man running for president who is a sodomite – and has married, and sleeps with – another man!

Has God turned His back on us? He sure has a reason to!

Getting back to 2 Chronicles, chapter 7…

“But if you turn aside and forsake my statutes and my commandments that I have set before you, and go and serve other gods and worship them, then I will pluck you up from my land that I have given you, and this house that I have consecrated for my name, I will cast out of my sight, and I will make it a proverb and a byword among all peoples. And at this house, which was exalted, everyone passing by will be astonished and say, ‘Why has the Lord done thus to this land and to this house?’ Then they will say, ‘Because they abandoned the Lord, the God of their fathers who brought them out of the land of Egypt, and laid hold on other gods and worshiped them and served them. Therefore he has brought all this disaster on them.’” (2 Chronicles 7:19-22)

Here’s the caveat about the “healing of the land” – if you turn away from the True and Living God – he will take the land away and bring disaster on the people.

So – if there’s any chance – any chance at all that we find favor with God as a nation – and receive future blessings – we need to humble ourselves, and admit that as a people, we have sinned, then we must collectively – as a people – go to God (not Allah, not Buddha, not idols – but the true and living God of Abraham, Isaac and Jacob) and seek forgiveness for the sins of the nation. Then we must turn away from these sins, to never repeat them.

I truly believe that we true believers are doing just this. But we see the judgement in states like California, New York and Illinois – with more jurisdictions to come – if people don’t come to their senses!

Repent – for there isn’t much time before Christ comes for His bride (that’s us, His believers, folks) – if you haven’t accepted Christ as your personal savior – today is the day, for you are not promised tomorrow.

Don’t get caught in judgement – repent of your sin – Christ died for your sins – all of them, no matter how bad. You just need to Acknowledge your sin – admit that you are a sinner, then ask Jesus to save you and forgive your sin.

2 Replies to “How Do We Extricate Ourselves From God’s Judgement?”